Climate : The future of energy in 4 charts

It’s not just climate change that’s spurring countries around the world to reassess their energy infrastructure.

As a new World Energy Council report on the « World Energy Trilemma » underscores, it is the combination of energy security, sustainability and equity that ultimately hangs in the balance with the increasing number of both government and corporate commitments made in recent months to transition toward renewable energy.

That’s not to say getting from point A to point B will be easy, however.

« We need to get better at coordination, including looking beyond the energy sector to meet climate and energy goals, which will require changes right across the economy to our transportation, manufacturing, construction and agricultural sectors, » wrote the authors of the report, which was produced with consultancy Oliver Wyman.

The stakes of this transition are particularly relevant this week, as global energy ministers and clean energy evangelists descend on San Francisco for one of the most visible gatherings since the Paris climate talks in December. The seventh annual Clean Energy Ministerial (CEM7) is expected to draw the likes of U.S. Secretary of Energy Ernest Moniz and Apple environmental chief Lisa Jackson, with a slew of corporate commitments and research reports also expected around the event.

The new report, released on the opening day of the energy summit, lays out the various risks and opportunities in play, which are summarized in four charts: 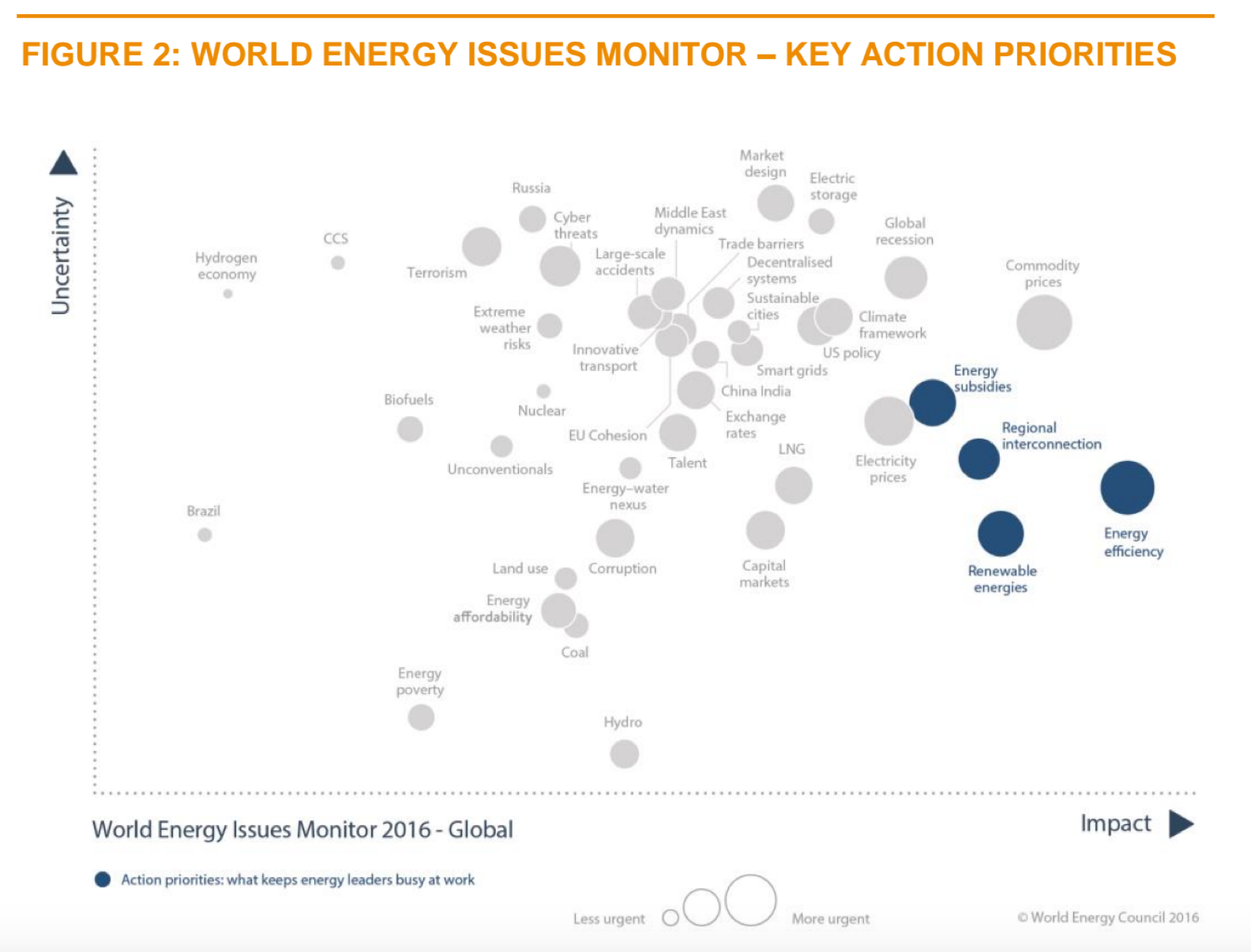 When it comes to the plethora of issues facing the world — terrorism, cybersecurity, the need to transition to more sustainable cities amid a trend toward urbanization — the report positions energy-related opportunities such as efficiency and clean energy as among those with the broadest potential impact.

Despite concerns about the rapid pace of global temperature rise driven by carbon emissions, the report predicts that fossil fuels including coal, oil and natural gas will continue to dominate global energy supplies through 2050.

While hydro and nuclear power are still in the mix as fossil fuel alternatives, non-hydro renewables including solar and wine energy are likely to account for 50 percent of the energy mix in Europe, 30 percent in China and more than 25 percent in the U.S. and Japan.

In the meantime, population growth and industrialization of developing countries are likely to increase the urgency of the world’s energy demand.

« Energy demand is predicted to grow by one-third over 2015–2040, » the report stated. « At the same time, the energy sector needs to adapt to emerging risks, such as increasing volatility of weather patterns and cyber risks — and new market structures and frameworks to integrate new technologies — all in a context of increasing price volatility. »

2. The path to a trifecta 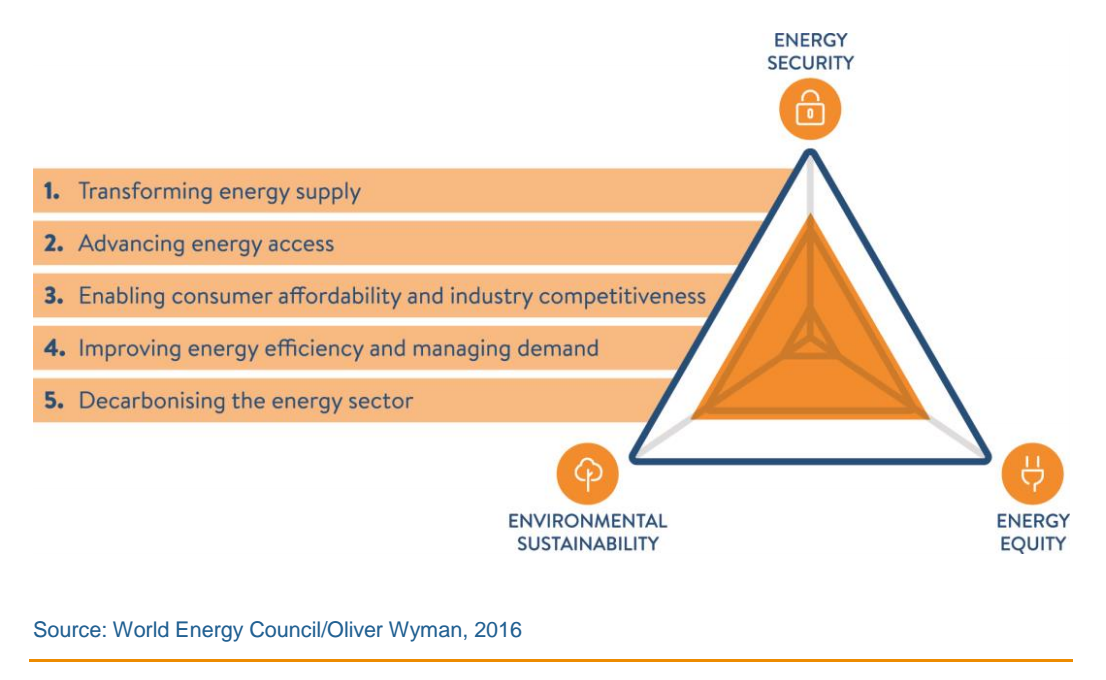 To achieve the overarching goal of « translating the trilemma goals of security, equity and sustainability into tangible actions, » the energy trilemma report lays out five broad strategies applicable for both the public and private sector.

In contrast to past years, however, it’s not all about the need to bring down clean energy costs (although that certainly hasn’t hurt).

Instead, the report urges more emphasis on related policy issues, allowing for more pilot projects and data gathering on the effectiveness of new approaches. Funding energy upgrades — and in particular, unlocking private sector capital to fund new energy infrastructure — is another component of the issue.

In the meantime, tailoring renewable energy technology to individual markets will be key. How distributed power enters into the equation is one question, as is the underlying issue of ensuring affordability for consumers in different income brackets. 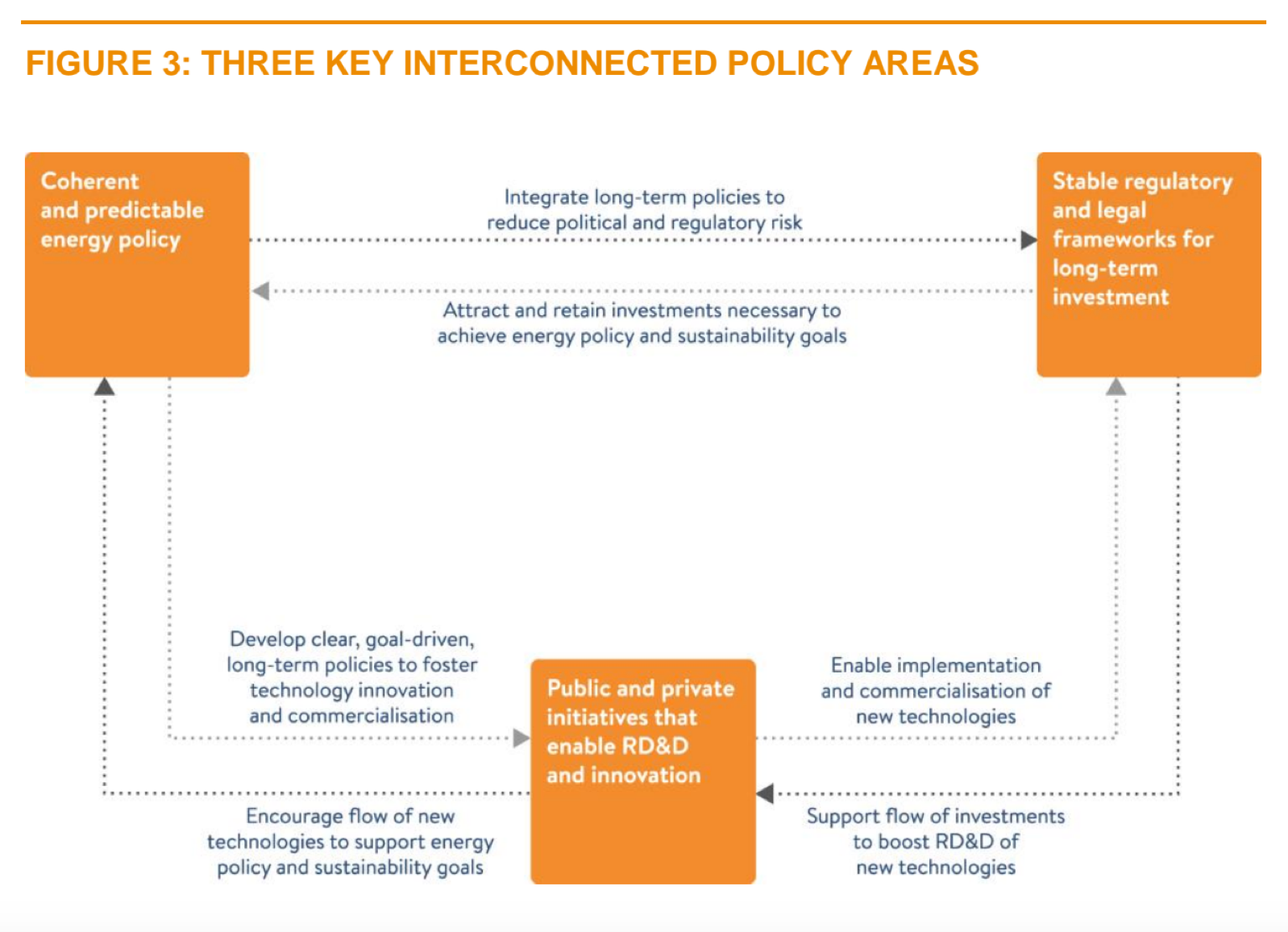 Energy policy is a vast and sometimes daunting landscape, but it’s also an area that is increasingly hard to ignore as clean energy advocates work to push renewable power from the fringe to the mainstream.

Making good on the long-discussed potential for public-private cooperation and signaling a long-term intent to transition to clean energy are two imperatives for increased business backing.

In the process, look for more emphasis to be placed on seemingly contradictory policies, such as ongoing global subsidies for fossil fuel companies while also praising the potential of renewables.

« There is a need to implement consistent, predictable regulatory and legal frameworks to support long-term investment in energy infrastructure, » the report stated. « These include the effective use of market-based economic instruments to ensure a fair marketplace for all energy technologies. » 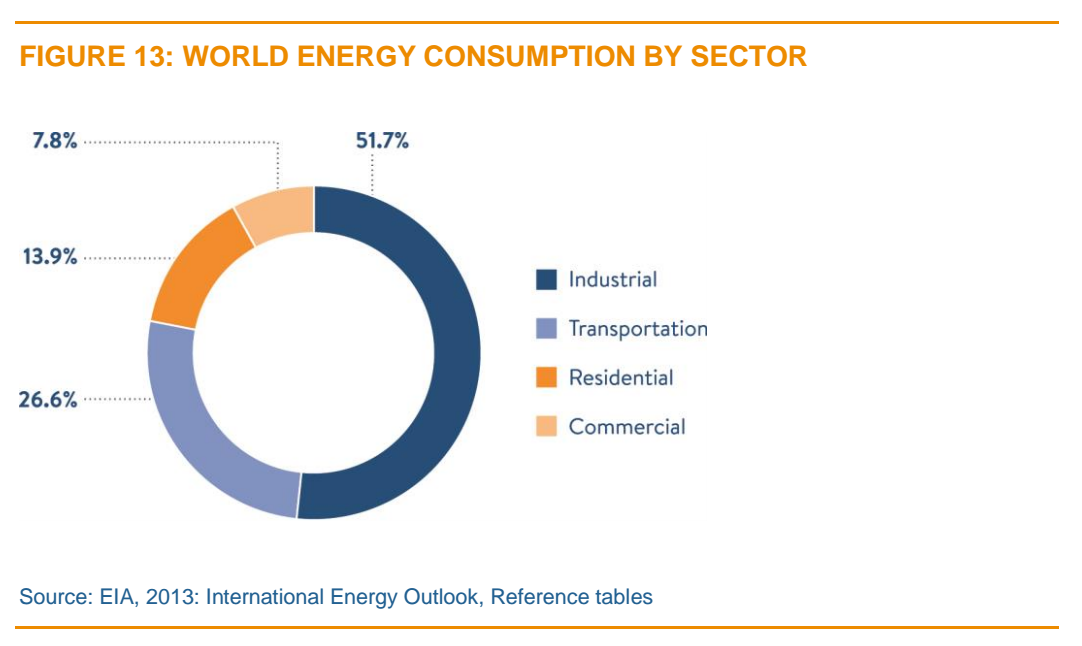 By 2040, there are expected to be 1 billion more vehicles on the road in developing countries, even with the trends toward electrification and transportation-as-a-service offerings such as ridesharing and carsharing. That’s not counting the tens of millions of new commercial vehicles also expected to hit the road.

Transportation is one big example of energy-intensive sectors of the economy that will be crucial to decreasing climate change-inducing greenhouse gas emissions.

How trends that have first started to gain traction among consumers, such as electric vehicles and rooftop solar, translate to commercial scale will be one big potential lever to rein in the carbon footprint of various sectors.

« Energy management must go beyond the energy sector and include a range of technologies to drive energy improvements in key sectors, » the report authors wrote. « These can include smart metering, efficient buildings, heat pumps, efficient motors; LED lighting and other appliances can also contribute to higher energy efficiency. »